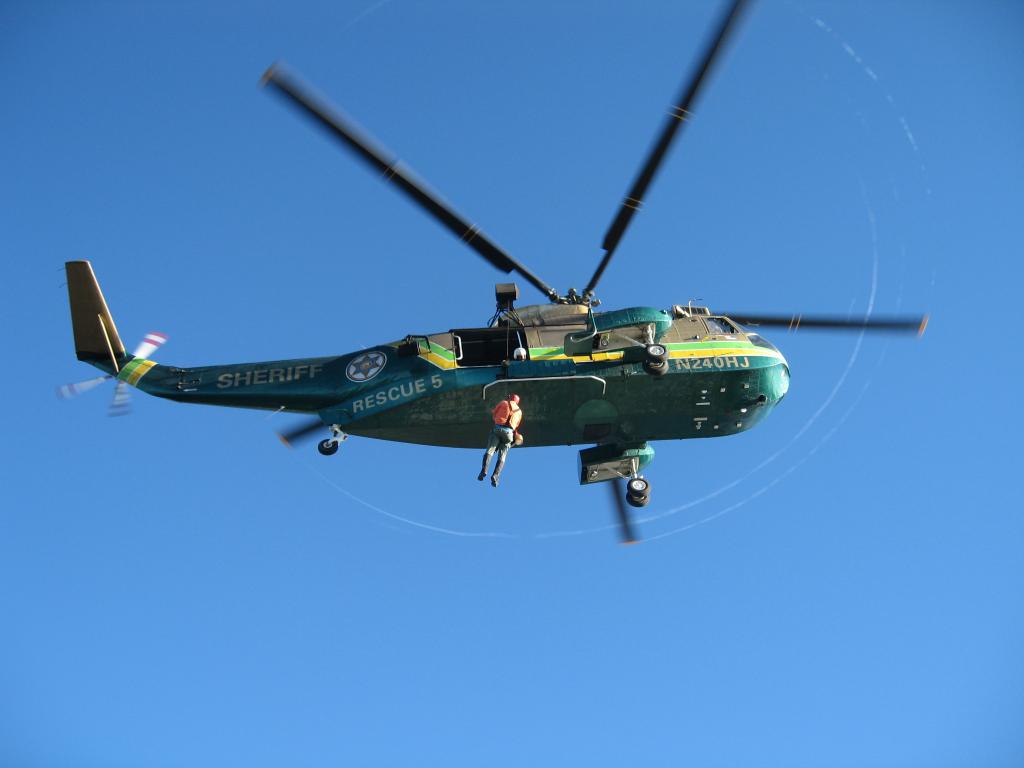 Last night I got an email from the commander of the Search and Rescue (SAR) team that I am a part of, about a mutual-aid callout on San Jacinto for a missing hiker. I got the call at about 2230 and quickly responded that I would be there. I got about 4 hours of sleep as I had to wake up at 0330 in order to be at the Sheriff's Office at 0500 to pick up one of the Sheriff's vehicles and drive to the base of the tram by 0600 hours. I am not normally one to be on time, but when it comes to searches it is important to be punctual as someone's life is on the line.

At the briefing my teammate Mark Kinsey and I got our mission which entailed us riding up to the San Jacinto peak on Los Angeles Sheriff's Department's gargantuan Sikorsky SH-3 Sea King known as Air Rescue 5 then riding the hoist down to the summit and then hiking cross country through the west side of San Jacinto and eventually coming to a trail that would take us to the tram. I was excited about riding in a helicopter, as the last time I had the pleasure of rotor based travel I was in Search and Rescue in Santa Fe, New Mexico.

Zipping down from a hovering helicopter on a piece of aircraft cable attached to my seat harness whilst carrying my 24 hour pack was quite a rush. Once I was on the peak and I unclipped from the hoist I snapped a few photos of the bird and Mark and I made our way across the ridge.

The mission was supposed to be technical so we kept our harnesses on, but we never ended up needing them apart from the helicopter bit. It was really just bouldering for the first mile or so until we turned down towards the saddle between two peaks, at which point we had to walk on top of dense brush for about another 1/2 mile dropping several hundred vertical feet. After the brush it was fairly easy going for the next couple of miles until we hit more dense brush and it started raining. Despite the rain and the brush we made good time and soon enough we were on a real trail. We double-timed it back to the tram and made our way down to the command post for debriefing at around 1530.

We didn't find any tracks or signs of the missing subject, but hopefully other teams will find him tomorrow. [You can find the rest of the photos here]

Update They found him and he is ok!